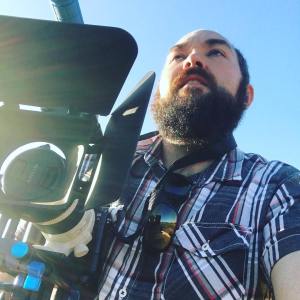 A native of rural New Hampshire and graduate of Rhode Island School of Design (BFA, Film/Animation Video – 2005), Thomas moved to Los Angeles and immediately began working in the film and television industry. His visual arts background proved valuable in both production and post production, winning him the respect of his peers and even some accolades as an editor (Emmy Honors, Tele Awards, etc.).   His works have aired on networks such as NBC Sports, Discovery Channel, History Channel, Travel Channel, National Geographic Channel and the Science Channel. The most notable shows in Thomas’ resume (with viewership in the millions) are “The Deadliest Catch”, “Ice Road Truckers”, “Axmen”, and “Ultimate Survival Alaska”.

Beyond Thomas’ television resume (well over a hundred hours of programming), his passion is with sharing thought provoking and spiritually positive messages through the medium of film and video.  He and partner Gwenn Morreale came together to form Greater Earth Media in 2016 so that they could put their talents to bring hopeful and inspiring films and television shows to life.

Gwenn Morreale has an extensive career in film, television and theater on a variety of projects including “Fameless” for truTV, “Monster House” for Discovery Channel, and “American Masters” for TCM.  She has produced several award-winning films, the short documentary “Whistling Dixie,”  and the hit new rock musical “London Calling.”

A nature girl and activist, she holds an MA in Media Ecology from NYU where she focused on propaganda and political communication.  She has managed political and advocacy campaigns, written prolifically on climate change and other environmental issues, and worked with various non-profits, including working with wolves,  educating about their TRUE NATURE and the need for peaceful co-existence.

It is vital to use media for good, not just for profit, and she has teamed up with Thomas Durant to do just that with Greater Earth Media.